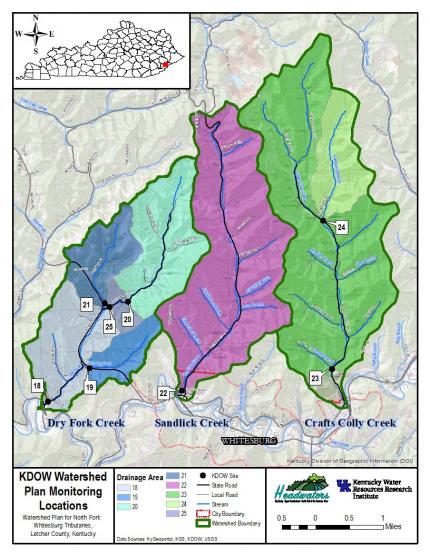 Crafts Colly, Sand Lick, and Dry Fork are tributaries to the North Fork of the Kentucky River. They are located just north of the City of Whitesburg, in Letcher County, which is in the coalfields of southeastern Kentucky (see map below). The three watersheds encompass 18 square miles of primarily forested lands and about 30 miles of streams, most of which are entrenched. Because of the steep mountain terrain, most of the houses are constructed adjacent to the stream with roadways crisscrossing streams frequently. Most of the watershed area is unsewered and failing septic systems and straight pipes are a source of bacterial contamination for waterways. The riparian corridor of most (87%) streams have been impacted to some level by development, with heavy riparian impacts on over half of the streams. Coal mining has left its mark on the waterbodies, with 13 legacy mine drainage sites, two large coal refuse piles, and three active mines.

Monitoring conducted in support of this project found that warmwater aquatic habitat use was either non-supported or partially supported by these streams. E.coli measurements showed the primary contact recreational use (swimming) was not supported at any stream, and the secondary contact use (wading / fishing / boating) was impacted in the headwaters of Dry Fork and along Crafts Colly. These impacts are due primarily to human wastewater, causing elevated nitrogen and phosphorus as well. Surveys identified severe erosion on 1.32 miles of streams, primarily related to channelization due to road construction or placement. Stream pH was neutral, but iron and cadmium concentrations were above regulatory criteria for aquatic life use in several locations.

Survey results showed that the community believed the greatest impacts to water quality are from failing septic systems or straight pipes, trash in streams, and mining runoff. The community also believed water quality improvements were important and supported funding for this need. Low income levels and lack of property ownership does discourage some implementation action, and some fear lingers that the economy will be affected if water quality issues are publicized.